This is the third part of a five part series on Seneca’s On the Shortness of Life. Read Part I – Finiteness, Part II – Protecting time and living in the present. 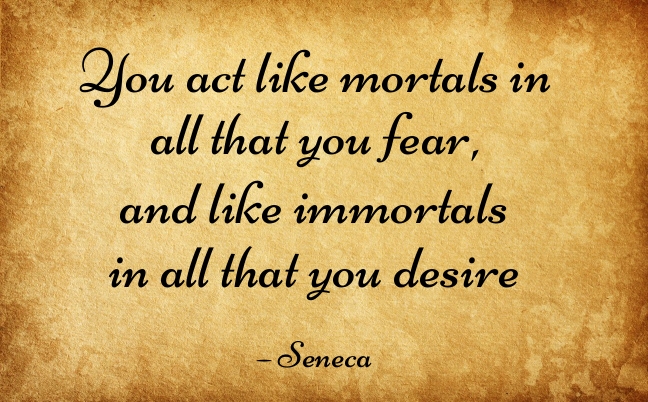 “So it is inevitable that life will be not just very short but very miserable for those who acquire by great toil what they must keep by greater toil. They achieve what they want laboriously; they possess what they have achieved anxiously; meanwhile they take no account of time that will never more return.”

It takes a lot of physical, emotional and spiritual effort to get what we want. We daydream about buying the hottest new thing, and if we’re lucky, and work hard enough, we can afford to buy it. But by the time we get around to it, we’ve already moved on to desiring the next biggest thing, and the enjoyment that we were supposed to get from getting the things we want never lives up to the fantasy.

That’s why I have committed to a minimalist lifestyle (as much as I can). The list of things I want to own is a little different from most people. I don’t want a huge house, brand name clothes or an expensive car (I don’t even like to drive). So I don’t work to earn money for these things.

Yes, I want to live a fairly comfortable lifestyle, but I would feel guilty about indulging in too many luxuries. It feels wasteful and selfish to me. I decided a long time ago that I want to spend my life on things that are important to me, not what my culture, society, or neighbours think is important.

There are things that almost everyone is scared of – disease, old age, and death to name a few. We are human after all, it’s perfectly normal to not want to think about suffering, to block out a future of which we cannot change, and to fear the unknown.

But in our desires, we act like everything can last forever. If all of us wanted the biggest, latest, fastest stuff, we would end up destroying our environment (more quickly than we are now) and the cruel irony is that everyone will wind up with nothing.

Just because someone has a lot of things, it doesn’t mean that they’ve lived. Indeed, if the cost of obtaining a huge house, lots of money and a fancy sports car was one’s health, relationships and spiritual fulfilment, you could argue that they haven’t really lived at all.

So when it comes to things I want to have, it isn’t too difficult to see the easiest way to be happy is to not desire too much, or at least, desire things we can’t have.

But, when it comes to things I want to do, that’s a whole different story. There is just so muchthat I want to do in one lifetime I can hardly see myself being able to accomplish it all. And what if I don’t? Will I be unhappy about it? Will I regret it?

“So you must not think that a man has lived long because he has white hair and wrinkles: he has not lived long, just existed long. For suppose you should think that a man had had a long voyage who had been caught in a raging storm as he left harbour, and carried hither and thither and driven round and round in a circle by the rage of opposing winds? He did not  have a long voyage, just a long tossing about.”

You can even travel the world, but unless you’ve learned things about people, about other cultures, lessons that made you a better person, more understanding and open, then you may as well have stayed at home.

In the same way, you can achieve a lot of things in life – it seems almost anyone can earn a million dollars these days – but if they don’t have any meaning, if they don’t make us, or anyone else happy, then what’s the point? If you’re going to spend your precious time on doing stuff, well then it better be bloody worth it.

But there is a way. If we pick and choose our desires and goals carefully, then surely happiness can be found where they align the most. Can it not?