When I first began my minimalist journey, one of the first places I began ‘decluttering’ in my life was my diet. It wasn’t until I moved away to university and was able to take full control of what I bought and ate that I really got things started. I’ve always been interested in food, cooking, and nutrition and since I’ve studied Food technology for just over five years, it’s been a big part of my life for a long time.

I’ve talked about minimalist diets in a previous post in detail, but here I want to talk about what I do specifically to stick to it:

1. Eat simply. Despite my dedication to food, when it comes to actual cooking, sometimes there’s not enough time or I just get a little bit lazy. This doesn’t mean I should pick up the phone and call in a takeaway straight away, instead, I’ll just throw together some simple fresh ingredients and make a meal out of that. I think one of the advantages I have is that I am not in the least bit fussy about what I eat, and I am perfectly happy eating the same thing three nights in a row. For example, if I don’t feel like cooking, I’ll just make a salad out of some spinach and rocket, and flavour it with a spicy dressing and some butter beans. Total time 2 minutes. 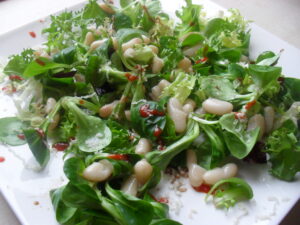 2. Cook simply. On the same note, I don’t enjoy excessive cooking as I can be a little bit impatient sometimes. I prefer to only eat things that can be cooked either in less than 10 minutes or by steaming or boiling (or microwaving). This is one of the reasons why I became pescetarian as meat took too long to cook (except when making burger patties). It’s not all to do with laziness however, because by cooking simply and quickly you preserve more of the goodness in the food as heat destroys a lot of the vitamins and washes out the minerals in it.

3. Drink simply. I almost never drink fizzy drinks, mostly because I don’t feel they quench my thirst! Also, they are completely full of empty calories and processed stuff, I just don’t feel comfortable fuelling my body with dirty oil so to speak. However, I do have the occasional alcoholic drink every now and again (I am a student after all) but only occasionally. Normally, I drink water, but I also have a collection of teas that I like to make everyday, including green tea, jasmine tea, orange tea, pomegranate tea, white tea, lotus leaf tea(!), and camomile tea for night time. Tea has almost no calories, is refreshing and is full of anti-oxidants.

4. Eating less. About three times a week, I try intermittent fasting. I found out about it through my research about diets about a year ago. I read some of the studies and to me, the results sound credible. Now, I don’t intend to give anyone dietary advice here, this is post is about what I feel works for me. Intermittent fasting, in short, is going through short periods of not eating. At first, I was skeptical, but then I realised that by doing so, one can reduce the amount of calories they eat in a day, and basically it’s another way of saying eat less.

5. Simplify the kitchen. The kitchen is one of the places where mess and clutter can build up quickly if you’re not careful. I share a kitchen with my flatmates, so there is limited space which fits me all the better. I don’t buy equipment I don’t need, I have just enough plates and cups that I use all of them and I only buy ingredients I know I will use before the expiry date. The last point is really important because that where a bunch of money can be saved. I don’t write it out or anything, but I tend to have a plan in my head about what I will eat during the following week and I shop accordingly so I use up everything before it goes off.